Lubina a la Sal
On a trip to Cordoba Kirsty and I were staying out in the El Brillante district to the north of the city centre. We were walking into town one lunchtime and spotted a row of small bars on a side street offering menús del día so we decided to try one.

The owner, Pepe, suggested we try the “lubina a la sal” as it was the speciality of the house. It certainly looked impressive on the plates of other customers so we took his advice.

What a magnificent choice. I’d seen it in other restaurants but never really fancied it because I thought it would be terribly salty but that just isn’t the case. The salt hardens in the oven allowing all the tasty juices inside the fish to be retained then the salt breaks off in big chunks after cooking which leaves a perfectly cooked fish with hardly a trace of salty flavour. 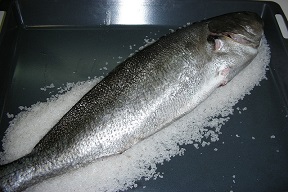 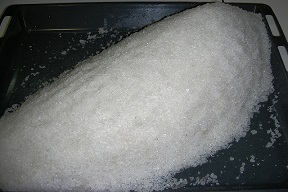 The dish is very simple to make using an ancient technique common to many cultures. Gypsies have put hedgehogs in clay and baked them over a fire. Maoris have dug pits in the sand, wrapped pigs and fish in banana leaves and cooked them over hot sticks. Chinese and Indians have used terracotta bricks.

Put a layer of salt in a big, deep casserole up to a depth of 3cm and lay the fish on its back on top. Cover completely with the rest of the salt. Bake in a very hot preheated oven, 220’C/425’F (gas mark 7), for about 35 minutes.

When you remove the casserole from the oven knock the bottom of it to loosen the salt block. Then carefully knock the salt from around the fish. Serve at once with the hot melted butter (optional) and lemon wedges.

If you want to add extra flavour simply add a combination of butter, tarragon, parsley, garlic, salt and pepper into the belly of the fish and close the opening before cooking.

This method of preventing the flavours of the fish from escaping could be used for cooking many other fish and meat dishes.

© Copyright 2019 Unofficial site of Passage 2 India
All rights reserved. This site is in no way affiliated with or endorsed by Passage 2 India. It exists as a compendium of supporting information intended for informational purposes only.

If you want to buy this website, please don't hesitate to contact us via e-mail: domain (dot) sales (dot) org @ gmail (dot) com