Arroz con Leche
Personally I’m not much of a fan of desserts after meals (a coffee and brandy is fine) so Spanish eateries suit me as the desserts on offer are often limited to a piece of fruit or a pre-packed flan or similar. Obviouly the better the quality of restaurant you attend the better the sweet tray is likely to be.

When I first came to Spain I assumed that rice pudding only came in tins and had to be heated before serving! One day after a particularly good Menú del día I was delighted to see ‘Arroz con Leche’ as the sweet option. Realising that it was a cold dish surprised me at first but it was delicious and the cinnamon that was sprinkled on it really added to it nicely. Since then it’s probably been my favourite ‘postre’ in Spain. Here’s a very simple recipe for the dish. 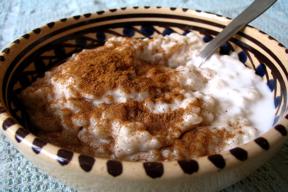 Under a low to medium heat allow the contents of the pan to simmer gently until the rice is well cooked and the milk has halved in volume. This usually takes around 45 minutes. Be sure to work on a very gentle heat so that there’s no danger of burning the milk which can easily destroy the dish.

Now add the caster sugar and continue cooking for about 10 minutes when the sugar should have fully dissolved and the liquid thickened.

Next you must remove the pan from the heat and allow it to cool to room temperature.

Once at the required temperature place the contents of the pan in an airtight container and put it in the fridge until it’s cold. This usually takes around 3 hours but I prefer to refrigerate it overnight with a view to serving it the following day.

Before serving remove the cinnamon stick and place the rice pudding in individual bowls lightly sprinkled at the last minute with the ground cinnamon.

© Copyright 2019 Unofficial site of Passage 2 India
All rights reserved. This site is in no way affiliated with or endorsed by Passage 2 India. It exists as a compendium of supporting information intended for informational purposes only.

If you want to buy this website, please don't hesitate to contact us via e-mail: domain (dot) sales (dot) org @ gmail (dot) com